Footprints is open and ready for entries!  This summer, we were very fortunate to have Tali Winkler, a Ph.D. candidate at the University of Chicago, work with the books in the library of Spertus Institute for Jewish Learning and Leadership, entering Footprints from its storied collection.  Tali describes her experience below (images courtesy Tali Winkler).

As a graduate student enthusiastically following the progress of Footprints since its inception, I was eager to participate in the process myself. This summer, I had the opportunity to work with the rare book collection of the Spertus Institute for Jewish Learning and Leadership in Chicago, IL. The library has an extensive collection of Hebrew printed books, many of which contain handwritten treasures on the margins of their pages.

There are two aspects of this discovery process that I find most exciting, the first of which is described here.   (The second will be described in a later post.) The marginalia in an individual book can teach us an immense amount about the book, its owner(s), and how the book itself was used. Often we can identify an owner from other historical records, in which case it adds a new dimension to what we already knew. On the other hand, often the owner is not otherwise known or identifiable; utilizing this type of primary source thus allows us to hear the voices of those individuals that may not otherwise have been preserved.

A book titled Korban Netanel exemplifies this first exciting aspect of Footprints. The work was written by Nathaniel Weil (1687-1769), a scholar who worked in Prague as the head of a yeshiva and was eventually appointed as the Chief Rabbi of the city of Karlsruhe, Germany in 1750. He remained in this position until his death in 1769. The work is a commentary on Asher ben Yechiel’s writings. It was published for the first time in Karlsruhe in 1755; according to a note in the catalog record at Spertus, this was the first Hebrew book to be printed in the city of Karlsruhe.

An inscription on the title page of the copy owned by Spertus provides a brief window into the “life” of that specific copy of the edition. The inscription was signed by two individuals: Tiah (Jedidiah) Weil (1721-1805) and a Rabbi Eli. Tiah Weil was the son of Nathaniel Weil; he succeeded his father as Chief Rabbi of Karlsruhe after his father’s death, and he too served in that position until his own death. I have not been able to identify Rabbi Eli.

Tiah Weil wrote the majority of the inscription; in it, he explains that he was selling this copy to Rabbi Eli, rabbi of the city of Salzburg. He wrote the inscription while in Salzburg, and Rabbi Eli signed his own name beneath Tiah’s inscription. 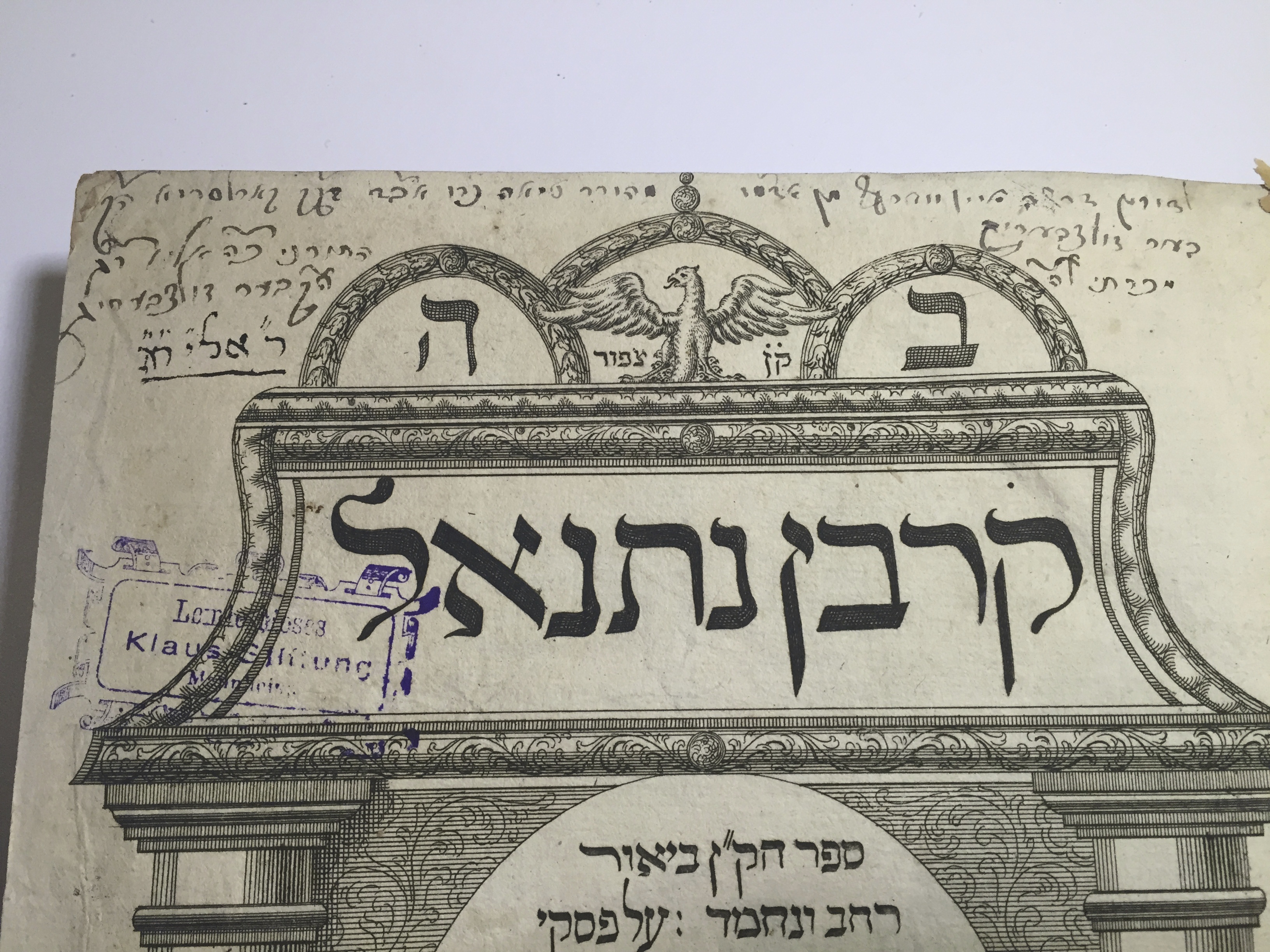 This short inscription captures a distinct historical moment of an interaction between two men, both leaders of Jewish communities in different cities. This moment encapsulates an exchange of scholarship, a physical object (i.e. the book), and presumably money or some other form of payment. It also reveals a great deal about the dissemination of books in this period; while conventional trade routes were presumably used as well, those involved in the printing of a work could take a more active personal role in the marketing of the book. Conceivably Tiah Weil travelled with copies of his father’s book, with the intention of selling them to scholars he encountered during his travels. Perhaps there are even other extant copies of the Korban Netanel with inscriptions written by Tiah documenting sales to other scholars he encountered in his travels in Europe, waiting for the next Footprints contributor find them!

Teaching with Footprints: List College Students at JTS Contribute to the History of the Jewish Book